Thank you very much for taking the time and giving me feedback.
close
By: Guy Mograbi
TwitterGithub

I defined a custom local repository for Maven, but eclipse simply ignored it. You can define local repository location easily by modifying M2_HOME/conf/settings.xml.
This resulted in a strange behavior. The commands were successful when running from command line but failed on missing artifacts from Eclipse.
Eclipse complained about missing artifacts, but when I check, I saw they were there.

Another strange side-effect I noticed was that Eclipse thought my Maven repository was in a different location.
It seems that eclipse save Maven repository location in a variable called “M2_REPO”.
You can see it by going to “Window ==> Preferences ==> Java ==> Build Path ==> Classpath Variables”.
The annoying thing is that Maven sets this variable as “non modifiable”.

While I read a lot of threads about this issue, everyone suggested something crazy like running a Maven plugin that modified M2_REPO variable. The command looks something like:

You can read all about it in the official Maven Eclipse plugin site.
However this will resolve this single problem.
I wanted a solution that will synchronize Maven with all my changes for Maven settings.

The answer is quite simple.
It seems that Eclipse comes with an embedded Maven version.
This is extremely bad.
You can easily modify this by going to Window ==> Preferences ==> Maven ==> Installtion and tell Eclipe to not use the embedded version and instead define an external installtion. 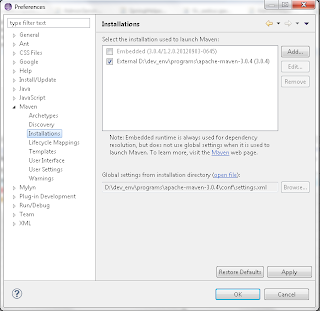